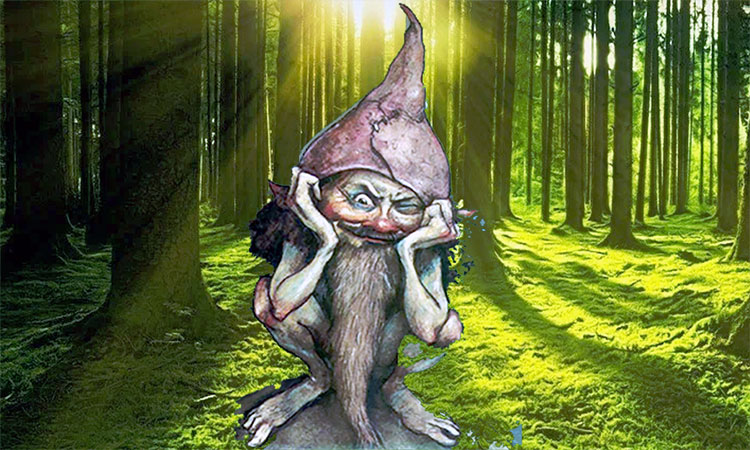 My paternal grandmother was born in a rural area of Sweden in 1891, and when I was a boy she told me stories of the Tomtar,  small beings that took the appearance of old, bearded men. Tomtar were no more than 3 feet tall and wore pointed hats, which we’ve of course come to associate with gnomes and similar creatures. Legend tells that Tomtar were capable of invisibility and could shapeshift, sometimes taking the appearance of a large, grown man.

Also, according to legend — and Grandma Alice’s stories — Tomtar would usually be found on a farm and would carry out chores at night and help care for the farmer’s animals. It was thought to be bad luck to see one, but my grandmother claimed that she would often find his small footprints in the snow or mud around her home.

Although basically a benevolent spirit, Tomtarna were easily offended and could be vindictive. If, for example, Tomten felt that the farmer was mistreating his livestock, heard swearing in the barn, or neglecting to clean up a mess, he would become incensed and cause mischief. Items around the house were found broken, the milk curdled, even the cows’ tails tied together. Tomtar also became angered and would seek revenge if they were seen or if the farmer and his family failed to leave a bowl of porridge and butter out for him on Christmas Eve. My grandmother and her family used to follow this tradition, leaving out porridge with butter for Tomten each Christmas Eve.

My grandmother was quite insistent that the gnome-like Tomtarna were not merely the stuff of fairytale and legend, but real beings that occupied the farms and rural landscapes of Sweden. It was these stories that contributed to my lifelong fascination with tales of diminutive humanoids. Originally coming out of the pagan traditions regarding “earth spirits” and the worship of the natural world, Tomtarna later became associated with ungodly or heathen beliefs after the Christianization of Scandinavia. However, despite the sometimes negative association, they have remained a popular figure in Swedish folklore.

Obviously, the more familiar correlative is the Gnome, of which their are purportedly a great many variations and go by many names, including Erdmanleins (Germany), Nains (Britain), Nisse or Nissen (Norway and also Sweden), Tontti (Finland), Dudje (Bulgaria and Albania), and others. Not surprisingly, legends of little people are found not only in Europe, but throughout the world.

In North America the Native American people speak of “little feet” or “baby feet” that often inhabit mountainous regions or dwell underground. These beings are also said to have various magical and psychic powers, including the power of invisibility and to mentally confuse any human foolish enough to pursue them. Encounters with these entities are also associated with memory loss and periods of missing time, much akin to the reports that we hear in relation to the UFO/alien abduction phenomena (a subject that I’ll save for another post). An excellent article on Native American lore concerning little people or babyfeet in North America can be found on Dr. Karl Shuker’s blog.

In 1932, gold prospectors Cecil Main and Frank Carr, blasting open the walls of a gulch in the Pedro Mountains of Wyoming, discovered a cavern that had been sealed behind a wall of rock. Within the cavern sat, cross-legged, a small, wizened figure no more than 14″ high. The tiny manneken was naturally preserved and mummified, having been spared from the elements because of that fact that it was sealed within the cave. The creature was removed from the cavern and later examined and underwent an x-ray analysis by Dr. Henry Shapiro of the American Museum of Natural History. The fact that the little man sported a full set of teeth and a fully-fused skull dispelled any possibility of the small humanoid being an infant. Interestingly, the Shoshone people told of the Nimerigar, a small, aggressive people who occupied that region of Wyoming. The Nimerigar were supposed to have hunted with bows and poison arrows and lived in the Wind River and Pedro Mountains.

Personally, the question that I most frequently ponder is “are accounts of these creatures merely folklore, or are they based in truth?” I imagine that posing this question would be much more quickly dismissed prior to 2004’s discovery of Homo floresiensis on the Indonesian island of Flores. These diminutive humanoids, which have become known as “hobbits”, appears to be a separate species of human that only grew about a meter tall. The bones found are believed to be as young as 13,000 years old, demonstrating that this tiny human lived at the same time as modern Homo sapiens. If a distinctly different version of humanoid existed alongside modern humans, I believe that we must entertain the idea that other such diminutive humanoids may have lived elsewhere throughout the world.

In South America many of the native people speak of the Duende, a race of small goblin- or gnome-like creatures that make their home in the surrounding forests and mountains. Recently, a video of a small, pointy-hatted being in Argentina surfaced on the Internet. The creature, if it is a fake, is a convincing one. It shuffles out of some high grass with a strange sideways gait, into a road as a group of teenagers returning from a fishing trip lounge nearby. The boys seem genuinely startled, judging from the scream that escapes one of them as the being appears.

The video, of course, is so outlandish that it has been dismissed by most who have seen it, but coming from a graphics background I’m of the opinion that this creature is not a CGI creation, and it certainly seems to be quite diminutive — of proportions that you might only see from a person who suffers from primordial dwarfism, an exceedingly rare condition. His hat barely clears the high grass out of which it shuffles. I’ve posted it below for the readers to judge for themselves.

So, is it possible that little people once existed, or do currently exist? If so, are they flesh-and-blood beings such as ourselves, simply an undiscovered race of creatures that have cleverly hidden from us? Or, are they something more than that? Are they of an interdimensional or paranormal nature? Folklore has consistently described them as having magical gifts and properties but is that nothing more than myth and fairytale?

As the newer developments in quantum physics point us to a different view of the nature of reality, that we exist not in a Universe, but a Multiverse is it possible that there might be beings that can traverse these different planes of existence, moving between our reality and others? What connection, if any, have reports of these creatures in a paranormal context have to do with the modern reports of alien abductions and missing time experiences? This is an area that I personally find fascinating and will revisit frequently in the course of my writing on this blog. Meanwhile, I encourage anyone who has an opinion about such matters to comment on this article.