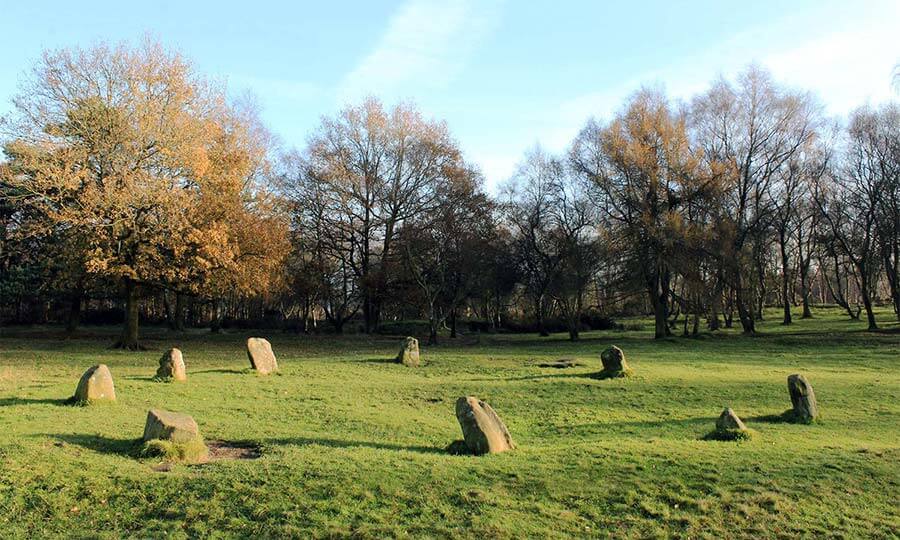 On May 30th of 2010, I received a comment on my post titled Missing Time Experience? about the time slip and memory loss incident that I experienced in my early teens. The comment came from a woman named Linda Smith who, as I later learned, was an American and a frequent visitor to England, Scotland, and Ireland. In fact, Linda went on to tell me that she visited the UK twenty-one times and is planning her twenty-second trip in September.

Linda complimented me on my article and then urged me to visit Great Britain, saying that that’s where she experienced her own episodes of “high strangeness”, including a missing time incident in Derbyshire, England, and a very odd experience in Scotland. She also asked me to email her for details of both occurrences, as they were too long to write about in the comments area of this blog. I’m always happy to hear from my readers, and I gladly emailed her as requested. I found both accounts fascinating.

With Linda’s permission, I’m going to recount each of these anomalous events as she described them to me. But rather than going into them both, I’ve decided to write about them in two separate posts. The Scotland episode is even stranger and more complex than her experience at the Nine Ladies stone circle, so I’ll cover that one in another article later this month.

Of ancient megaliths and magical objects

It was in the mid-1990s, and Linda and her husband (since deceased) were traveling in northern England. One day, they decided to visit Stanton Moor in the northwest part of Derbyshire and several miles southwest of Manchester. The Smith’s strange experience took place at a Bronze Age stone circle known as the Nine Ladies, an ancient megalithic structure consisting of nine stones, each of which stand a little less than 1 meter high and are arranged in a rough circle. The Nine Ladies megaliths are situated in a woodland of birches, ash, and beech trees in Stanton Moor’s Peak District National Park.

Here is the story, as Linda tells it:

“We set out from Bakewell immediately after breakfast, around nine a.m. Finding the path off a country road, I set out to investigate because the path forked; my husband, with complications from diabetes, decided to wait. I soon discovered I had taken the wrong fork and retraced my way, only to find that my husband had elected to follow and try to catch up with me. We then took the left fork into the woods and without much delay came to the lovely Nine Ladies stone circle. A couple of other tourists were browsing. We really didn’t notice when they left, but we found ourselves in the center of the circle — alone in that beautiful wood.

My husband leaned down and picked up an object, saying, ‘Someone has lost a lens to their glasses’  and handed the object to me.  On closer inspection I saw that it was a round clear glass like a monocle, with an old-fashioned gold rim and a hanger. In the very center was a brilliant green triangle, about 1/3 inch in diameter.

Intrigued, I pocketed it and we returned to the car, thinking it would be lunchtime before too long. Can you imagine our shock to find the rental car’s clock indicating the time was 3:45 p.m.? We thought that it was, of course, completely wrong. But it wasn’t. Somehow, we had spent nearly seven hours in what would have taken no more than two at most.

And the ‘monocle’? When I got home with it, I was quite puzzled that the beautiful green triangle in the center was no longer there! It simply disappeared and never came back.”

Surprisingly, Linda described this story as being “ho-hum”, and perhaps in comparison with her other experience in Scotland, it was. I honestly can’t see how finding a mysterious object inside an ancient structure and then losing five hours or more can be described as “ho-hum”, even if this experience was less dramatic than her second. Frankly, I think I’d be rather perplexed and perturbed.

What I found particularly interesting about this account was the finding of the strange monocle or lens. It made me wonder how (or if) it fits into the time and memory lapse Linda and her husband experienced after discovering it. Prior to this, I’d never heard of mysterious or magical objects being associated with missing time anomalies, and thus far I’ve been unable to locate other such reports.

And of course, the significance of the “brilliant green triangle” at the center of the monocle and its subsequent disappearance is also highly intriguing. If readers of this post have knowledge of similar reports or can direct me to any useful resources, I’d be very appreciative.

The subject of Missing Time is without a doubt the most-commented-on topic that I’ve discussed on The Paranormalist. In addition to the many blog comments, I’ve received dozens of emails from individuals across the USA and throughout the world who have been subjected to these strange occurrences. And with each account, I’m struck by the sincerity of the people who have been so kind and courageous as to share their experiences with me.

The other aspect that I’ve found striking with regard to these tales of time lapse or missing time is that, while they generally share some basic commonalities, the variety of circumstances under which they occur is simply staggering. The significance of this phenomenon eludes me, and I realize that its cause may never be found.  However, having personally experienced an episode of missing time, I’m very reluctant to dismiss these reports.

As always, please do not hesitate to comment on this blog post or to email me if have a question or any information that you’d be willing to share.

33 thoughts on “Missing Time Inside a Stone Circle”