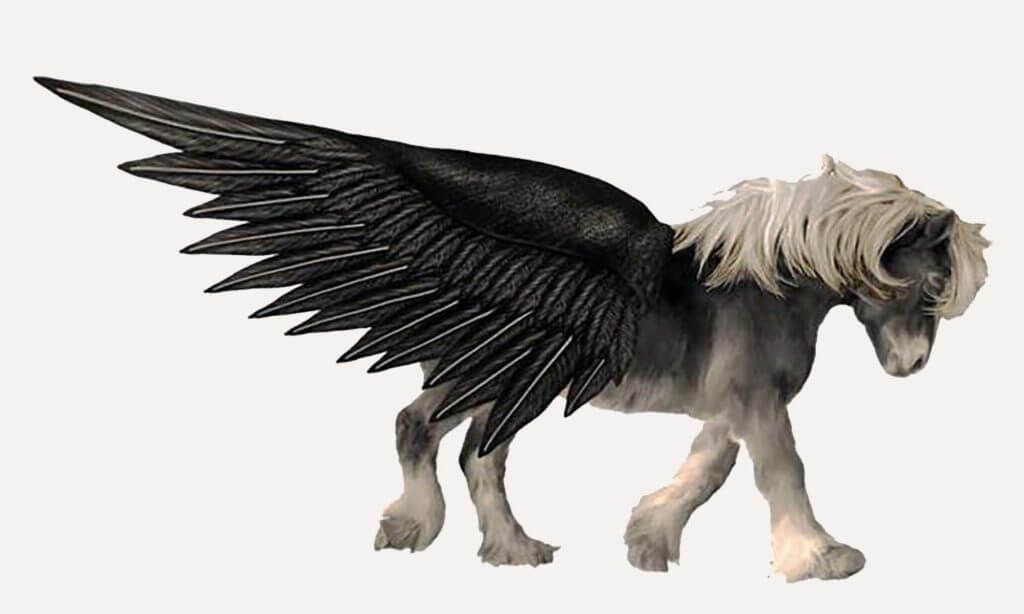 In 2007, in the very first broadcast of the now-defunct The Paranomalists podcast, my co-hosts and I had the pleasure of speaking with Irish author Herbie Brennan.  Herbie penned the very successful Faerie Wars series of books, which I’ve read and enjoyed very much. Most recently, Mr. Brennan wrote The Shadow Project and The Doomsday Box. In the course of our conversation, Mr. Brennan mentioned a creature that I had never before heard: a fairy horse.

We spoke with Mr. Brennan by phone from his home in Ireland and found him to be a delightful gentleman with a wonderful sense of humor.  We talked at length about a number of subjects, including Bronze Age megalithic structures, stone circles,  and Celtic mythology, and the fairy lore of Ireland.  I eventually asked Herbie his opinion of the possibility of the existence of a “Faerie Realm” where the beings of Irish folklore reside.

Herbie replied by saying that he was reluctant to believe in fairy legend, but he had several experiences in his life that changed his opinion of the reality of fairies. One of those experiences occurred when he was a young man living on a country estate in County Kildare, Ireland. On this property was a Bronze Age earthen ring which stood roughly fifteen feet high and surrounded a megalith, or standing stone, of about eighteen feet in height. This particular megalith, called Longstone Rath,  is a fairly well-known structure and one of many that are found throughout Ireland and the British Islands.

On Halloween of 1971, Mr. Brennan was visited by an old friend named Jim Henry.  Later that evening, sometime “well after eleven o’clock at night”, according to Herbie, Jim asked to see this rath. Shortly after arriving at the site of the ancient structure, Herbie reports that his friend had a distinct feeling that his presence there was unwelcome, remarking “I don’t think this place likes me.”

Shortly thereafter, as Herbie and Jim turned to leave the rath, along the top of the earthen ring, there suddenly appeared a herd of approximately twenty to twenty-five tiny, white horses “no bigger than cocker spaniels”, in the words of Mr. Brennan. The tiny horses galloped along the top of the earthwork, disappearing down the opposite side. Herbie and Jim ran out of the rath and to the other side to see what had happened to the tiny horses, but they had vanished. Neither man had any explanation for what they had just seen.

Some years later, Herbie told the story of the white horses to his good friend, the late author Desmond Leslie.  Leslie had a fascination with mythology and was quite knowledgeable about the subject.  Upon hearing Herbie’s account of the tiny horses, Leslie replied, “Dear boy, don’t you know what those were?”. Herbie replied that he had no idea whatsoever what they were, only that he’d seen them.  “Those were faerie horses,” Mr. Leslie continued. “They’re associated with the megaliths of Ireland, and there are also reports of them in Japan.”

Of course, stories of fairy horses and mythological steeds abound in Celtic folklore, as well as in many other cultures. Some of the more common names known to most of us are the Pegasus, Unicorn, and Centaur. In Norse mythology, the god Odin rode an eight-legged horse named Sleipnir, the greatest of all horses. Among the Celts, there are the Scottish Kelpie or water-horse; the Phooka, a shape-shifting creature that often appears in horse form (the Welsh tell of a similar creature they call the Pwca); and on the Isle of Man, the Manx Glashtyn is a goblin that appears in the shape of a horse and rises at night from the banks of the isle’s lakes.

Shortly after publishing my article A Gnome by Any Other Name, I received a comment from a man from Nigeria who claimed to have heard “little men” in his ceiling and seen their tiny footprints on the ceiling boards. He goes on to say “they” (I assume he means he and his family) have heard the sound of sweeping and “once, the sound of a horse galloping“. He concluded his comment by mentioning that they lived “very close to the rocks”.

The idea of rocks being nearby is also rather intriguing to me. I recently received another comment in response to the Gnome article from a man named Charles Yancey who claims to have seen a small man-like figure in his bedroom late one evening while he and his wife lived in Colorado. He too mentioned the fact that there were large rocks and boulders in and around his property, which brings me back to the idea of these fairy creatures being associated with these stone megaliths. Is there a common connection here? Is the close approximation of the ancient megalithic structure and natural rock formations and boulders somehow linked with the appearance of these tiny entities, both humanoid and in equine form?  Honestly, I don’t have an answer for this, but it’s an idea that I plan to research and explore in future posts on The Paranormalist.

A sincere thank-you goes to Mr. Herbie Brennan for allowing me to re-tell his description of his sighting of the fairy horses. For those who would like to view Mr. Brennan recounting this tale just about verbatim as he told it to me in our interview, please see the following YouTube video titled Belief in Faires: