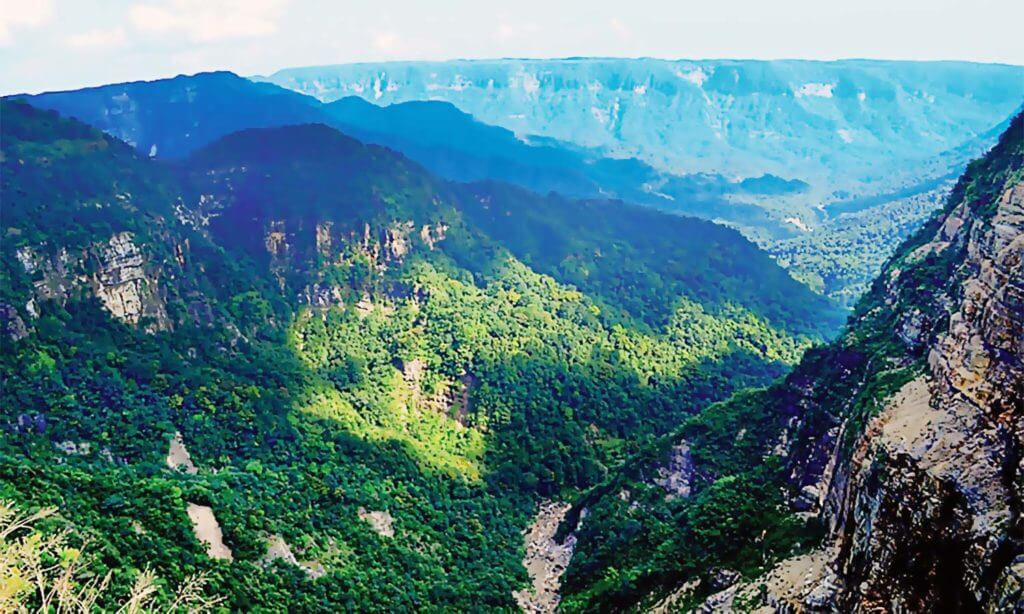 Could the Mande Burung of India be a relict Gigantopithecus?

I have started looking through my notes now, and the detailed interviews we conducted with eyewitnesses to the creature, and I thought I would share a few facts with you from them. Firstly, it appears to be omnivorous and seems to make the most of its environment’s food sources… I was told it has been sighted in pineapple plantations. One of the eyewitnesses described how he had seen a mother and baby eating bamboo. Secondly, it displays aggression. For example, another witness told how he had been chased out of a bamboo plantation. Could this have been a mock charge, in a similar fashion to the Gorilla?

Before I entered the jungle, I was also told by one of the forest guides that it ate freshwater crabs and I subsequently found what appeared to be MB prints, turned over rocks, and crab shells in a small stream. All described the creature as being huge, at least 9 feet tall, it seems, and covered in black hair. The consistency of the descriptions from the witnesses, especially under the scrutiny I gave them, was very encouraging.

I have shown some of my photos to some of my friends now. I expected them to remark on the beauty of the environment, or the snapshots of tribal life, such as the 100 drums Wangala festival, which I attended. But no. Almost without fail, most have taken the mick out of my jungle trousers.

Ladies and Gentlemen, I was not in Manchester then, and camo pants and braces really are a good look out there. LOL.

I think I know what I’ll be getting for Christmas…

I just arrived home a few hours ago. As you no doubt appreciate, I am tired tonight, but I had an amazing time and felt that I, and the rest of the team, met with some great success. I will post more detail about the expedition over the next few weeks, but here are some headlines.

I am convinced the Mande-Burung exists. Dave Archer found what appears to be an MB footprint, at a site where an eyewitness confirmed he had seen the creature. He and John McGowan, went on to find a trail of them. I found an MB footprint in Nokrek National Park. What I found particularly interesting about this one, was that you could see a boulder in the stream which had been tossed aside, followed by some debris of a freshwater crab. The locals had told me on previous occasions that the MB was fond of eating these particular types of crab. Whilst I can’t be certain it was an MB print, the size and shape were certainly consistent with eyewitness reports. The casting at the site failed due to the very wet conditions.

We collected a number of very consistent eyewitness reports, which described a large black bipdeal ape, which built ground nests and ate bamboo. Nothing on the camera traps so far, but we haven’t finished going through them all yet. We have collected hair and bone samples which just MAY come from the MB, but of course we need to test them. Quite by chance, and very significantly indeed, John McGowan may well have discovered a completley new species. I can’t say anything more about this though, until he has conducted a thorough analysis.

The area has some amazing, vast, and largely untraversed, jungle. Beautiful. The perfect place for a relic gigantopithicus….

8 thoughts on “A Relict Gigantopithecus?”