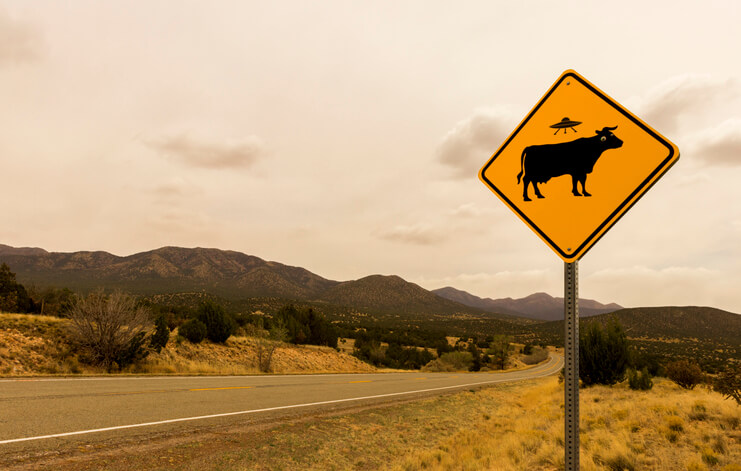 Hunt for the Skinwalker, by molecular biologist Colm Kelleher and investigative journalist George Knapp, is the true account of a remarkable and disturbing series of events that visited the “Gorman” family at their 480-acre ranch in northeastern Utah, beginning in the fall of 1994. During this time, the ranchers witnessed UFOs on their property, a giant wolf, an invisible monster, floating orbs, and an interdimensional portal. Additionally, they suffered numerous cattle mutilations of their livestock.

of events that visited the “Gorman” family at their 480-acre ranch in northeastern Utah, beginning in the fall of 1994.

The first chapter finds Tom and Ellen Gorman, their son and daughter, and Tom’s father, Ed, newly arrived at their recently-purchased ranch.

As the Gormans stood on their property unloading some items from their truck, they saw an unusually large wolf approaching them from across a field. The creature appeared to be completely unconcerned with the Gorman’s presence, and in fact, seemed determined to make contact with them. As the animal approached it was apparent that it was indeed a wolf of tremendous size, standing chest high to the six foot-plus Tom Gorman and weighing an estimated 200 pounds.

As intimidating as the beast’s size was, it appeared to be quite docile as the Gormans petted it and stroked its fur, leading them to believe that it might have been someone’s pet. However, the huge wolf made a sudden bound toward the pen containing the Gorman’s prized Angus cattle and grabbed one of the calves by the muzzle, and began to pull the bleating animal through the posts of the split-rail fence. With a curse, Tom Gorman sprang to action and running over to the animal, began kicking it in the ribcage with all his strength. The huge wolf seemed unperturbed and did not relinquish its grip on the calf, even as Ed Gorman began beating the creating across the back with a baseball bat. Tom then called to his son to retrieve his .357 Magnum handgun and proceeded to pump three rounds into the massive beast’s chest and abdomen from point-blank range.

The huge wolf neither bled, flinched, or even yelped, and only after the third shot did it release the calf and slowly backed away. Both astonished and disturbed, Tom then took his thirty aught six rifle from his truck and again shot the animal and close range. This time, the only reaction that the creature gave was to again slowly back away a few paces as it continued to gaze at the Gorman family. Only after another few minutes did the gigantic wolf casually trot off across the field. Tom and his teenage son, Tad, gave pursuit, and guns in hand, followed the wolf into a grove of trees at the far end of the field. They were close behind it and following a clear set of tracks that were deeply embedded in the soft ground, when the wolf’s paw prints suddenly vanished. The clear trail of prints simply disappeared, as if the animal evaporated into thin air. Frightened and confused, Tom and Tad returned back to the ranch, at a loss to explain these strange events. It was later learned that the last known wolf in Utah had been shot in 1929.

This is how Hunt for the Skinwalker begins, and the incident with the huge wolf (not the last) would prove to be only the first of an ongoing and frightening series of events of high strangeness that eventually caught the attention of the National Institute of Discovery Science (NIDS). NIDS is a research organization that was founded and privately funded by real estate and aerospace magnate Robert Bigelow for the purpose of applying rigorous scientific study of anomalies. Employing highly qualified and experienced scientists and a world-class review board, NIDS was headed by molecular biologist Colm Kelleher, PhD., the organization’s Deputy Administrator.

The Gorman family, however, lived at their Utah ranch for two years before the NIDS team set up a research station and began their long study of the events taking place therein. After the encounter with the wolf, the Gorman’s experiences continued, first with trickster-like phenomena involving missing kitchen utensils, tools, and other items around the household and property and increased in intensity and strangeness as time went on. Strange, poltergeist-type phenomena continued in and around their home, and soon they began seeing floating globes of light, seemingly under intelligent control. Some flying objects seen over their property were rectangular refrigerator-like objects similar to the “chupas” reported in Brazil and discussed by Jacque Vallee in his excellent book Confrontations: A Scientist’s Search for Alien Contact. Other bizarre phenomena included:

It was the baiting and subsequent killing of the Gorman family’s faithful cattle dogs by the glowing blue orb that was the final straw. After almost two years of being terrorized by these ongoing phenomena, the Gormans were mentally and emotionally exhausted, as well as being nearly financially ruined by the frequent disappearance and mutilation of their prized cattle. It was also at about this time that news of the bizarre events at the Utah ranch made the national press, catching the attention of billionaire hotel and aerospace entrepreneur Robert Bigelow, founder of the National Institute of Discovery Science.

Shortly after the initial inspection and investigation of the property, an offer was made by NIDS to purchase the ranch from the Gormans. The Gormans accepted the offer in August 1996, and Tom Gorman was hired to stay on as the ranch manager. The NIDS team of scientists then set up camp on the property. Between August 1996 and February 1997 there was little activity, as if whatever intelligence was governing these events was unwilling to reveal itself to the newcomers. However, in March 1997 a new series of bizarre and startling events began, including the appearance of an invisible beast that terrorized the cattle and sent the NIDS team’s magnetometer readings spiking. These events that began in March 1997 continued from that point through the summer of 1997, and was the most intense and frequent period of activity during the NIDS team’s tenure at the ranch. By 1999 the activity had lessened to the point that only a couple of scientists were posted on the ranch, and by 2004, when Colm Kelleher had left NIDS, it was several years since any significant activity had occurred — although it is reported that strange phenomena still take place at the property.

Without recounting all of the many events of the book, Hunt for the Skinwalker is a story that is unique for the fact that it was studied for several years with scrupulous scientific rigor by a highly qualified and dispassionate team of scientists. The NIDS team were equipped with an array of night vision surveillance cameras, magnetometers, spectrometers, and other audio, video, and forensic analysis equipment, and gathered a very compelling body of physical evidence of the various phenomena that visited the ranch. Remarkable too, is the fact that such a great variety of types of phenomena occurred, running the gamut from poltergeist activity, sightings of anomalous creatures and Bigfoot-like beings, UFO sightings, and more. Also of note was the interactive, “trickster” nature of these experiences with the Gorman family and the NIDS team, giving support to the notion that these events were under intelligent design, and not random phenomena.

We would be remiss if we did not mention that this particular tract of land where the ranch is located has had a long tradition among the native Ute tribe as being cursed, and in “in the path of the Skinwalker”. The Skinwalker, according to the lore of the Navajo people, is a witch or sorcerer, capable of shape-shifting, summoning demons, and casting evil spells. Because of the numerous witnesses to the phenomena in and around this ranch, the documentation of the NIDS scientists, and the Native American beliefs concerning the area, this makes for a very compelling account of high strangeness and the paranormal. I encourage anyone interested in these areas to read this fascinating book.